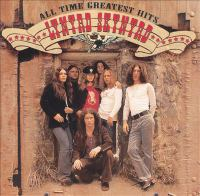 Description
Lynyrd Skynyrd's 2000 compilation All Time Greatest Hits suffers from the same ailments that plague many compilations of its time, but there is one problem in particular that hurts it: instead of offering all of the "all time greatest hits" on one disc, the compilers pulled their punches, overlooking a few big songs while occasionally substituting live or acoustic versions for the original studio versions. That means that this is a Skynyrd compilation without the famed original recording of "Free Bird" -- a live version is here instead. It doesn't really matter that it's a good version, taken from 1976's One More from the Road, or that the live version actually charted in the Top 40; nor does it matter that "All I Can Do Is Write About It" is a good acoustic version originally released on the eponymous 1991 box set, because this is a collection made for a general audience. It should, therefore, have the versions that a general audience knows best. Apart from that, and the usual nitpicking over songs that should have been included ("Workin' for MCA," "Don't Ask Me No Questions," etc.), this remains a solid collection, containing most of the Skynyrd material that a casual follower could want. If the double-album Gold & Platinum remains the greater compilation, that's because it captures the essence of the band better. This includes most of the best-known songs on one disc, and that's noteworthy in its own right; it may even be preferable for some listeners. ~ Stephen Thomas Erlewine
Also in This Series

Note! Citation formats are based on standards as of July 2010. Citations contain only title, author, edition, publisher, and year published. Citations should be used as a guideline and should be double checked for accuracy.
Staff View
Grouped Work ID:
2498ff2d-737a-0c95-a81d-056d4b0b2972
Go To GroupedWork